The door is closing on 2008. Jon and Ruth have always enjoyed the fact that the year begins to end as we give thanks for what we have. Like many we will spend our tomorrow with Family, eating too much and watching the parade. This year has been an incredible journey. There were friendships formed that will never break, an amazing effort by all who contribute to Crimespree to make up for Ruth’s sabbatical, few health scares in the immediate family, and a new beginning for the country we call home.

The challenges continue but so too, does a climate that is ripe for a new dawn of creativity, learning, and that thing that everyone who reads this site has in common, the written word. For those of you who soldier on writing in the mystery field, we salute you, for those who work in it, god bless (whomever your God may be), and for those who read it…. Thank You.

Thank you to all who spent time with us this year, and an extra big helping of Mashed Potatoes to all who subscribe to the Magazine. You make our lives better every day. On Thanksgiving Day 2008, we will raise a toast and celebrate you all.

Posted by ruth the crimespree gal at 7:12 PM 3 comments:

The
Exterminators Volumes 4 and 5

Volumes 4 and 5 wrap up this series and while I’m sad to see it go I have to say it ended with a bang and a wallop. The Exterminators has been interesting from the start, weird, sometimes gross and always entertaining. If you’ve read up to this point you know what I’m talking about.

These last two volumes explain why the pest problems have been getting worse and how our gel spraying bug killing heroes deal with it. I guess the trick here is to tell what happens without giving anything away.
Ok

Bug want humanity off the earth because they are ruining it, humanity fights back, big battle, lots of stuff blows up and get squashed. There are gangsta drug dealers, corrupted corporate execs, strange Island natives and a literary strip club. Interested yet? How about a huge urban assault hummer crushing a SUV?

There are also a couple stand alone stories that are really fun. I really liked the one that is set on a cruise ship. A brief explanation is given about how 2% of calls are top shelf, jobs that are actually fun. This is supposed to be one, but it turns into a cruise from Hell as an infestation of killer moths (butterflies?) are going to wipe out all the passengers. On the other hand they are almost all degenerates, so would it be a great loss?


Simon Oliver has really out done himself on these last two sets of trades and now that I have them all I plan to reread it all in order again. If you haven’t read this yet, get over your fear of bugs and go get all five right now. You won’t regret it.

Oliver also just finished a mini series called Hellblazer presents: Chas, The Knowledge. I recommend it as well.
Posted by Jon The Crime Spree Guy at 12:59 AM No comments:

GOING TO HELL - BUY A BOOK!

So, if all the doomsayers are right in the next twelve months we'll all be out of work, lose our homes and be screwed.
Maybe so, maybe no.

But, the publishing industry is hurting and feeling the crunch.Lay offs are coming, and it could also really hurt some authors we love.

So, to help out I suggest this.

Buy books for gifts this year. It's something almost everyone loves, and you can help support your favorite authors, publishers and bookstores. Even buying paperbacks will help.
We love to read, so we plan to support the very thing that we love and give books to people this year.
And fruitcake, but mainly books.
Posted by Jon The Crime Spree Guy at 8:10 PM 2 comments: 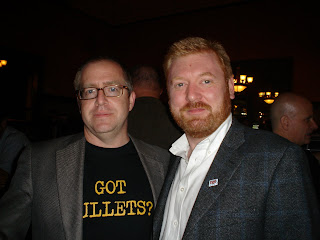 The latest batch of t-shirts is in.
Seen here on Tim Maleeny.

"Got Bullets?" on the Front, the Crimespree logo on the back.
Gold on black in a variety of sizes.

Want one for yourself? Want to give one as a gift?

only $20 including shipping in the US.

If you are interested shoot me an email at
jon@crimespreemag.com
Posted by Jon The Crime Spree Guy at 8:11 AM 4 comments:

Murder and Mayhem in Muskego number four is a wrap and what a weekend.
Once again a huge crowd mainly from the Midwest came out in droves to see a great group of writers talk about the books we here at Crimespree love best.

This year, like all has entirely recharged our batteries. From the early arrival of Kat Richardson, Blake Crouch and Sean Chercover, to the just left Simon Woods, Alison Jansen (Bleak House Books), Marcus Sakey and Sean Chercover, the extra and quiet moments we spent with all the writers is just grand. The time we spent in the library was magic. Reaching out to readers and presenting them with such a spectacular sampling of the talent available within the mystery genre is brilliant.

We brought back a forensics session this year and it was wonderful. Michael Black and Dave Case started the day off for us with Crime Scene Cops and grabbed everyone's interest right away. And then we were off.

From Characters Welcome to Apt Pupil, this year had four great panels and three conversations, lunch was again provided by the library, there were books by everyone there for sale thanks to Richard Katz and Mystery One Bookstore. And the books that were there for free, just for coming, kept flowing.....

The raffle did well thanks to the support of all the library's patrons.

We thank the following for attending and participating


and a very special thanks to Libby Fischer Hellman. Libby came for the Friday Night "Stump the Stars" hosted by J.A. Konrath and drove and extra 150 miles for us on Saturday to fill in on a panel. Special People, our Libby...

Duane, Harry and Cornelia, we're sorry you couldn't make it and thinking of you.

There was news.... off the set and on. A Couple of Talking Points from the day

S.J. Rozan's next book, Shanghai Moon marks the return of Bill and Lydia.

Judy Clemens next book features new protagonist Casey Maldanado. Described as a charcater escaping tragedy while roaming the country, it sounds like we might have a female Reacher.

Muskego's own Allan Armstrong will become a published author in 09

And at the end of the day, in a fabulous interview by Michael Koryta of Dennis Lehane, we heard the news that Patrick and Angie are getting off the island. They have indeed knocked on Dennis's door again. It looks like his next book may not be a sequel to THE GIVEN DAY after all. Are we ready for another Patrick and Angie Book? Yeah , I know.... stupid question..... stupid, stupid question.


this day of celebration was possible because of the work and efforts of the entire staff of the Muskego Library. Jane and Penny, feel the love. But it's the organization "FRIENDS OF THE
MUSKEGO LIBRARY. We were honored to present them with a Crimespree award yesterday. They prove to us time and again, in books..... everything is possible.

See you next year!
Ruth
Posted by ruth the crimespree gal at 7:43 PM 10 comments: