Upcoming DVD's for May 9th

This week has only one new release, but 3 releases filled with all sorts of goodies. Reviews for most of these titles will be available here on the Zone early next week. 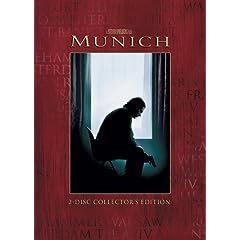 (2005) (Universal) Dir: Steven Spielberg; Eric Bana, Daniel Craig, Ciaran Hinds, Mathieu Kassovitz, Hanns Zischler, Ayelet Zurer, Geoffrey Rush. In single-disc and two-disc collector's editions.
Extras: Single-disc: Introduction by Spielberg. Collector's Edition: Six featurettes: "Munich: The Mission, the Team," "Munich: Memories of the Event," "Munich: Portrait of an Era," "Munich: The 'On Set' Experience," "Munich: Editing, Sound and Music," "Munich: The International Cast."
Spielberg’s Oscar-nominated film about the after-math of the 1972 Munich killing of Israeli athletes. I will hopefully be reviewing this in a few days. I say hopefully because my copy has not yet arrived. I will take a moment to say I thought it was good, but not as good as some of Spielberg’s previous films. Perhaps my expectations were too high. It does take a very good look at what certainly is morally ambiguous subject matter.

Rescue Me: The Complete Second Season (Sony)Three-disc set with 13 episodes, $49.95.
Extras: Blooper reel, featurettes: "The Second Season," "Filming in New York City."
Dennis Leary’s excellent TV show. Who would have guessed that Leary would end up being a decent actor? For more info, read Jon’s love letter to this show by clicking at:Rescue Me Overview Buy Rescue Me Season 2
Posted by Jon The Crime Spree Guy at 11:28 PM

Ronin is probably one onf my favorite movies of all time. This is one of the few movies that although I already own, I would but the double-dip collectors edition.

I will have a review of the special features within a couple of days.

Ronin is amazing. A clever film.

Ronin is such a fun movie. The cast was great. Lots of wonderful action scenes, and it still requires a bit of thinking.