When I was a lad and spent my days in school I waould always rush home every day. Did I miss my Mother? Not too much. Was I starving? Not really. I needed to get to the television. Wild Wild West came on every day at 4:00.

Well I need rush no more, because the folks at Paramount are putting The Wild Wild West out on DVD. Season one is available now. 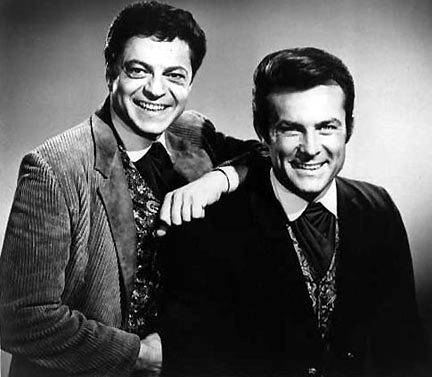 Originally airing from 1965 to 1969, The Wild WIld West, starring Robert Conrad, is a show that is set right after the Civil War, and Conrad's character, James West, answers directly to President Grant. He is undercover on his own train working for the Secret ervice to keep the west free of plots and madmen. He has as many gadgets as Bond, though because of the era they aren't as sophisticated. He is assisted by Ross Martin in the role of Artemus Gordan, a master of disguise.

The first season is in Black and White, though later seasons would be in color. The very first episode we see West trying to stop a crazed madman from Mexico from chasing out settlers and reclaim New Mexico. The episode is called Night Of The Inferno and co stars Susanne Pleshette who would later go on to marry america's favorite psychologist on The Bob Newhart show. All the shows were titled with "The Night of..." and my favorite of this season is The Night of The Druid's Blood. Evil Magicians, mad scientists, it's all in a days work for our heroes.

This show is loads of fun as the two make their way across the west doing whatver they can to preserve freedom and Democracy. And they go up against some really great bad guys. This really is wonderfully fun television.

The set is extra nice with intros from Robert Conrad and interviews with writers. They have the original "lost" opening, photo galleries and more.

This western espionage has been missing from the shelves and I for one am glad it's finally out. Don't bother with the updated movie, get the original.

28 episodes for a total of over 22 hours of viewing, completely remastered.
Buy The Wild Wild West Season One
Posted by Jon The Crime Spree Guy at 9:21 AM