This is also up at the Cinema Blog, but I love this show so I'm putting it here too. 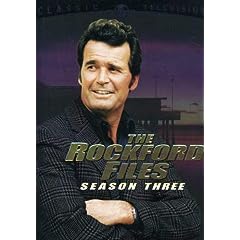 
Season three is the season that brought home an Emmy Award for James Garner. Originally aired in 1976-1977, the things that make this show work and make it a classic hold up. Jim Rockford doesn’t want to get in fights, he doesn’t want to make waves. But he will do what ever he needs to do to solve his case. Another real asset to the show was David Chase who wrote and produced Rockford Files.

Season three also sees the cast really mesh, not unlike a good pit crew on a racing team. Everyone involved with the show has hit their stride and as a result the entire season is great. The cases Rockford takes are a bit more meaty also, dealing with corruption and really helping people who need help. Stand out episodes for me are Feeding Frenzy which sees Jin helping his fiancé’s father make an error from his past right, and Just Another Polish Wedding which features Isaac Hayes as an old prison pal. And there are a lot of great guest stars through out the season; Cleavon Little, Strother Martin, Ned Beatty, and Robert Loggia.

No special features this time out, but there is also a bonus episode from season 4 called quick Nirvana.

No doubt about it, shows like this, and especially seasons like this are the reason Television on DVD is such a good idea. This is extremely re-watchable.

Posted by Jon The Crime Spree Guy at 8:52 PM