Murder and Mayhem In Muskego 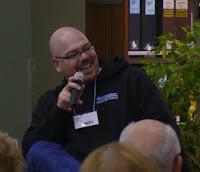 I can’t believe it’s over. The third annual Murder and Mayhem in Muskego is done and so now are Crimespree Magazine’s mystery commitments for 2007. But what a Saturday we had. This year was a glorious year when it came to cons, both the national and regional. But while I love the conventions, my heart truly belongs now to the one day event in Southern Wisconsin that Jon, Jennifer and myself have been lucky enough to be involved in from the beginning. The Friends of the Muskego Library are fantastic and Penny and Jane continue to rock my world.

What makes the one day so special? The caliber of the speakers and the attention from the audience. You see there’s only one track of speaking, so all 223 signed registrants and the dozens of people who walked in just to hear certain speakers shared a singular experience. In Muskego and Milwaukee we’ll be talking about this Saturday until next year.

For us, the event started this year as the Library’s guests began to arrive on Thursday. This meant a little extra time with the wonderful Maggie Griffin, Sean Chercover and Gregg Hurwitz (who by the way is married to an absolutely amazing woman). Friday brought the T.V. spot and we were all up early to watch Richard Katz, Sean and our own Sis, Jen Jordan talk mystery with the T.V. host, cheering them on with p.j.’s and coffee.

Then the airport runs began. While “our drivers” Tim, Mike & Jon ferried folks to and from the airport to the hotel and Casa Jordan , the library staff and volunteers were busy and getting a little sore. They borrowed chairs from City Hall, built platforms, and I kid you not here, made enough cookies and bars to feed 300 people during Saturday’s afternoon break. Final prep day was frantic, organized, and energizing.

On Friday evening we held two signings. Collector’s Edge Comics hosted Brian Azzarello, Gregg Hurwitz and Greg Rucka from 5:00 to 6:30 and then we had a full house at Mystery One. So full, many sought refuge in the bar next door. After the signing everyone came back to our house for lasagna and “bathtub full o’ beer”.

And Saturday was magic. Murder and Mayhem in Muskego has been magic all three years but as people continue to hear of the event and the attendee list gets larger and larger the magic grows. There’s an energy when 300 people gather to see their favorite writers and the writers get to see fans. Many in Muskego have never been to a mystery con, most of those will never go to one, but in one day they are converted. Mystery fan through and through. They buy the books, they read the books, and in much the same way that Crimespree tries to, they spread the word one reader at a time.

Morning is panel style and what panels we had. First up was “Chicago Blues” led by Libby Hellmann, and featuring Marcus Sakey, Barb D’Amato, D.C. Brod, Jack Fredrickson, and J.A. Konrath. The Anthology is going gang busters and the collection of short stories in Chicago Blues will hold up to any collection out this year. These Chicago writers talked about the collection but mainly talked about setting. Chicago is different for them all, an their novels reflect that. For Chicago as character can be effective in many ways. These folks have the bases covered. Something they all wish the Cubs will be able to do one day. 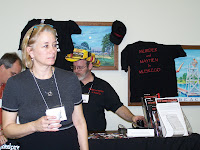 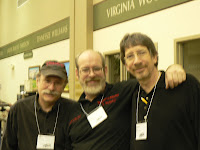 Second up was the Minnesota Crime Wave + Two. Carl Brookins, Kent Krueger, and Ellen Hart were joined by Mary Louge. Tom Schreck who is not from Minnesota but whose publisher is, moderated the four from the north. We heard stories about all of their books and the characters that live within them and Tom ran with his panelists.

Lunch was followed by the last panel of the day. Maggie Griffin moderated a panel that featured writers who are making the mystery genre accessible to a new generation . Sean Doolittle, Chris Mooney, Gregg Hurwitz, and Brian Azzarello (of 100 Bullets fame) talked with Maggie about “voice”. For an hour they discussed the different emotions they project in their work and the voices of other writers who have spoken to them.

Conversations came after that. First up, myself and Greg Rucka. For those of you unaware, I’m a huge Rucka fan and therefore had no spit after 11:00 Saturday morning. Still, it’s easy to talk in front of people with Greg about his work. His Atticus Kodiak series and extraordinary female characters alone would have allowed me to speak for hours, the comic books I read to prepare for our chat open up the possibility of many future conversations. I’m looking forward to seeing Carrie Siesko hit the big screen next year. With the atmosphere of Antarctica, a locked island murder mystery, and a kick ass femme, Whiteout promises to have everything I love about the movies.

Gary Warren Niehbur interviewed Laura Lippman. Hearing Laura talk about writing and her experiences both as a reporter and an author of fiction is always a joy. I have to say though, this conversation was unique. Conducted by someone who knows both her and her work, Laura was able to tell stories that hadn’t been heard before. She had everyone hushed and laughing out loud in turn. Gary is one of the people I want to grow up to be. Laura is one too. To get that out of a forty five minute chat is amazing.

The day wrapped up with two of Crimespree’s favorite people. Sean Chercover’s debut novel, Big City, Bad Blood has put him on the map. One of the people who inspired him to write is Robert Crais. To pair them up in Muskego was a dream come true. Robert Crais is one of mystery’s finest storytellers. We heard of Elvis and Joe and the stand-alones, we heard tales of woe from the road, and we heard Crais’s background, what brought him to writing and why he’ll never go anywhere else. It was a fine note to leave the day on.

Dinner was provided for the authors by the library afterwards and it’s here that we learned who the true stars of the day were, Penny Halle walked into dinner to a round of very loud applause, the loudest of the day perhaps. And it was from the writers who had given up their weekends for a trip to Muskego, Wisconsin. Pretty amazing when you think about it. Jane Genzel, the applause was for you and your efforts as well and I hope that next year you will join us all. God loves the Librarians, no doubt about it.

Random Thoughts of the Weekend

Side notes from Muskego:

I am a fan and like everyone in Muskego I had some decidedly “pinch me moments”.

My conversation in a moving vehicle with Chris Mooney about “our next steps” in this wacky world of mystery is one I’ll hang onto for a very long time. Thanks Chris.

This was closely followed by Robert Crais’s affirmation that you have to be a little insane to give up security to write but it’s a happy madness.

Seeing my Dad revel while sitting between Laura Lippman and Robert Crais while they caught up with one another on Friday night. His head was bopping like a fan at a tennis match soaking it all in. Priceless.

Jack Fredrickson saying he was so happy to be with us and he had had no idea what to expect but it was great. (I was thinking when you’re with the Jordans you never know what to expect). Yarmphf.

Seeing Barb D’Amato again. We hoped to even talk , but every time I tracked her down visually she was surrounded by people.

Dana and Allison being with us. I cannot imagine my life without these two ladies.

Kent Krueger’s “You were right, this is great.”

Listening to Azzarello and Rucka talk about the differences between the “comic” and “book” worlds.

Seeing Gregg, Joe, Libby and Michael Dymmoch there at any time not to mention good friends David and Annie C. They were there for the first Muskego and keep coming back.

Jeremy, Jill and Neil, Crimespreer’s who came from great distances to share with us. Mary R. next year we will kidnap you.

A customer from my day job. “Ruth, what are you doing here? Why do you get to interview an author?” I felt like Clark Kent. Busted.

The Wisconsin mystery community out in force to support this day. These are folks I’ve admired for a decade and to share this with them, especially because without the Bouchercon in Milwaukee in 99 that they organized it wouldn’t have happened….. mind blowing.

Jennifer’s short story collection Expletive Deleted officially launches this week. I have a short story in the collection. So I signed books, surreal enough …. but to do this while sitting next to Laura and being followed up by Libby. Geekiness ensued.

The Muskego Readers, the ratio of fans to writers on Saturday was 20 to 1, eat your heart out Thriller Fest.

Making the cover of the Shepherd Express & a spot on Channel 6. Murder and Mystery in Muskego has arrived.

Each and every author in attendance. All I read, and all I love for coming to spend the day with the good people of Muskego.

I’ll wrap this up. On Saturday morning the Muskego Police Department got a phone call.
“I think you’d better see what’s going on at the library?”
“Why sir, what’s wrong?”
“The parking lot is full of cars!”

Here’s to filling Library parking lots across the country, it can be done with “The Friends of the Library“ backing you.

It was a fantastic event. Penny and her crew at the library (as well as Jon and Ruth) deserves major kudos for putting together such a great event.

I was thrilled to be a part of it... again. Don't I deserve a "Repeat Offender" t-shirt? :) This event is one of the warmest, friendliest, most fun events I've ever done. Any author who's invited is crazy not to come.

Thanks, Jordans and Penny.

I had a great time. M & M in M
is a great event! Congratulations to Penny, Jon, Ruth, Jen, all the volunteers and everybody else! Let's do it again!