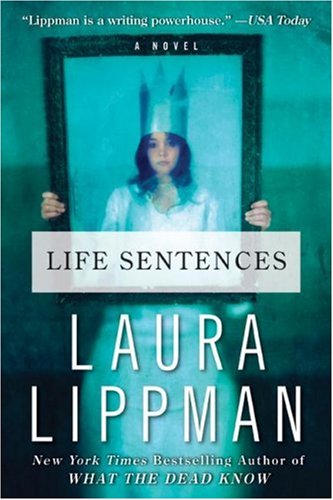 I don't know if I'm starting to be just a little more alert or if my mind is coasting to such a degree that "pop culture" is all it can handle in it's spongy condition. Beginning last Thursday Night and ending last night with the late night news I've been quite pleased on a number of fronts and so I'll share

The Book: LIFE SENTENCES by Laura Lippman.
Long time fans know of Laura's Memory Project which is updated at least monthly on her web site. She is definitely interested in Memoir as a form. The fiction writer in her has put this to extremely good use in this year's Stand-alone novel LIFE SENTENCES. The story of a memoir writer who hears a name from her past while on tour for the first novel she probably should have never written leads to another compelling read for both long time and new fans. One of Lippman's greatest strengths as a novelist has always been her character development and there isn't a character within these pages who doesn't get the Lippman treatment. Add in a compelling story and the flawed memories of a group of people and the result is a novel that explores everything from forty years of race relations in our northernmost southern city to the tragedy of unconditional love.

The Movie: The Watchmen
Yup, there I was in line for the midnight showing of Watchmen last Thursday thinking I was way too old to sandwich a midnight movie in between two 12 hour work shifts. And then the credits rolled. It was grand and I've enjoyed all of the reviews pro and con. The movie is true to the characters and to the spirit of intent with which Moore penned the original novel. It isn't meant to be super hero grand but rather to show the fallibility of those we'd deem super. Roger Ebert wrote a great review from the perspective of someone who'd never read the book & EW is covering ever facet of viewer. If you haven't seen it yet go this weekend and let us know what you think.

I mentioned the brain mush and I've become addicted to two television channels. First is the Food Network which had me doing my first ever shredded pork, complete with brine and rub and my own mac and cheese but with little goldfish for the crust instead of my go to croutons. and second is the Style Network's Clean House. I love watching other people clean up their debris while I snuggle on my couch with a cat.

Yes I watched ER last night and I haven't seen the show in years. But the writing was top notch, seeing old "friends" memorable (a gentle Benton, a well adjusted Ross and Hathaway). Ernest Borgnine broke my heart just a little and Susan Sarandon was subtly understated as she let go of her grandson. The scene between her and Doug when he asked, "Was he generous?" Was as compelling an argument for organ donation as I've ever seen. Best of all was seeing private practice surgeon Benton observe surgery on his close friend and be unable to stop himself from teaching. So I was chuffed.

I also bought newish music from The Fray, The Killers, Franz Frednand and Morrissey. Pop goes the culture, now back to the books.

Posted by ruth the crimespree gal at 3:20 PM