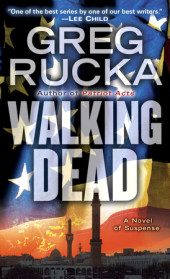 From the author of Critical Space comes the April 28th release of Walking Dead.

Crimespree and Author Greg Rucka sat down for a chat on April Fool’s day to celebrate the release and catch up.

Crimespree: Thanks for one of our favorite reads of this spring
Greg: You’re welcome

C:And I appreciate the fact that you gave Alena and Kodiak at least three paragraphs of everyday existence before the shit hit the fan,
G.R: well you want to engage the reader; the happily ever after stuff is what fan fic is for:

Walking Dead opens with trouble not at the homestead but next store at the neighbors. Three are dead but it is the teenage girl, Tiasa, left alive and sold into slavery that propels the story. Kodiak must rescue her.

C:Walking Dead is very much a book about the global epidemic of human trafficking. What made you decide to attack this subject?

G.R.: Like everything through the news. I was watching an interview with E. Benjamin Skinner, author of A CRIME SO MONSTROUS FACE TO FACE WITH MODERN DAY SLAVERY and then read the book. It was one of the harder reads I’ve ever had. I did some more reading. I tend to write about things that make me angry. I was angry.

C:I did some research on human trafficking for this interview and was surprised to find that first response google was rather minimalistic, you need to go to the blogs.

G.R.: I’m looking at a website now www.freetheslaves.com ; 27,000,000 slaves currently in this world. Something I’m sure no one in the first world and undoubtedly no one in the third world wants. 27,000,000 ;imagine that. We grew up with the illusive myth of “white slavery”. It became rather fetishsized, a titillation . It’s slavery. These persons aren’t sexual prisoners. They’re slaves.

C:You took this “issue” and molded it to Atticus Kodiak’s world. I was surprised though, Alena (Kodiak’s partner) shrinking from the hunt and hopefully the rescue of this young woman she adored.

G.R.: Writing in the first person is tricky. You can only work with the information Atticus has had presented to him. Alena has always been very internal and she doesn’t give you much. Alena comes into the book with a dilemma of her own. There were times when I wanted to give it up, but I knew it wasn’t the right time. I’ve known these characters for a very long time now and they both remain very true to themselves throughout the novel.

C:The landscape of WALKING DEAD is global, from Eastern Europe to Amsterdam, to London, to New York and Dubai, to the Albertson’s around the corner, this evil is everywhere and Atticus goes where he needs to be. Did you research on the ground for the book or through research?

G.R.: Mainly research, a lot of research, unfortunately there was very little on the ground. Family is a priority

C:As it should be, certainly with results like these. Unlike many “series” even as reading this book I was thinking to myself, “This could totally be a first read”. How do you manage that as a writer? Is it a knowledge of your readership (precalculated) or because as you sit down to write an Atticus novel, your voice melds with his?

G.R.: Well I certainly don’t want to go into a book and make my characters do anything incomprehensible and this is the most linear Atticus book. There’s a starting gun and a finish line. And the return of a certain character.

C:I was pretty psyched to see the person too (There’s a scene in WALKING DEAD Rucka’s been waiting for years to write.).

C:Effectively. I love the scene where, argh…. We don’t want to spoil it.

WALKING DEAD is a page turner. A one night read that spans the globe and taxes the skills of two (or is it three) of mystery’s best characters. Can they save the child and will Kodiak and Alena ever be able to truly retire? WALKING DEAD takes the reader on a terrific ride through evil almost unbelievable and an atrocity that touches us all. There are shootouts and horrible danger. The story takes you through the slums of Amsterdam and the glittering lights of Dubai, surely opulence in the desert is an illusion? Dependent upon pumped in water and money looking the other way. For long time fans there are cherished moments as well as horrific instances.

Rucka had this to say about Atticus and contemporary slavery.

I wanted to show that there is no evil head to the problem of human trafficking, it is a systemic problem. While Kodiak might be successful in a particular, he’s really rather limited as to what he can do about an epidemic that finds new soldiers every time others go down, but he tries.

C: Are you writing another now?

G.R.:I’m actually working on a novel called THE LAST RUN. It’s a Tara Chace story. Once again I’m going with a much more linear timeline. It’s been rolling around in my head for awhile now and I’m happy to be writing it now. I feel that CRITICAL SPACE, PATRIOT GAMES & WALKING DEAD are a good trilogy. We’ll leave them be for now, let the readers enjoy the story arc. I’m quite happy with the beginning, middle and end. I’m not sure there’ll be another (Kodiak novel) but there may well be.

C:When will we see the next book?

G.R.:THE LAST RUN is due in the Bantam offices on Sept 1st which would give us a projected release date of Summer ’10; making a book a year!!

C:that’s what I want, a book a year, always.

G.R.:well, now that that’s cleared up…

G.R.:I am doing my spin on Superman, yes and also Batwoman is coming out in June. We’ve been working on this for 2 years and it’s getting close.

C:Are you touring for WALKING DEAD?
G.R.:a bit, mainly west coast. San Francisco, Portland, Seattle and Poisoned Pen of course (look for dates on Greg’s website http://www.gregrucka.com . ) I’ll be in San Diego for Comic Con as well but mainly working on the new book this summer.

C:Is there anything else you’d like to tell the Crimespree reader?

G.R.:Read the magazine. And Jon Jordan is Insane; off the wall. Ruth is the sane, good one.

C :There are folks who might disagree with you :)
WALKING DEAD
Greg Rucka
April 28th, 2009
Bantam Books Posted by ruth the crimespree gal at 7:44 AM

Thanks for alerting me to this book. I've ordered a copy through my local library. I'm entirely with you: anger is a great motivator to anyone who seeks to write, and if modern slavery doesn't make you angry then you're sick. Analogously, it was anger at systemic miscarriages of justice and at the theft of archaeological treasures from Iraq that drove me to write "Perilaus" (ISBN: 978-1-60693-812-6). Anger at the surveillance society of modern Britain is driving my next attempt at a novel!

Great more stuff from Greg he is one of my favorites, I have interrupted my visits to a Viagra Pharmacy just to go to a book store and find something new from him