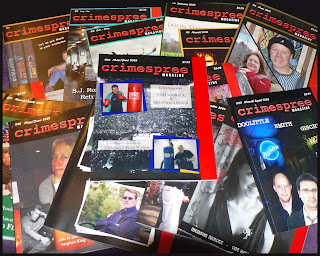 This coming week we are shipping issue number 24 of Crimespree Magazine. We have four years under our belts and are now entering year five. When we started this we had no idea what to expect and sitting around that pool in Las Vegas I would never have dreamed that we would be where we are.

We would like to thank everyone that has helped us stay at this for four years. That includes authors, book sellers, librarians, and most importantly, our readers. You keep us plugging away at this and you keep us motivated to keep getting better.

Our cover story is an interview with Michael A Black and Tom Schreck, two authors who actually put on gloves in real life and as a result know what they are writing about. Both are great guys and great authors.

And speaking of contests, there are a bunch more through out the magazine, including a contest within Julia Spencer-Fleming's article.

It's full of lots of interesting reading and loads of Crimespree goodness
Posted by Jon The Crime Spree Guy at 12:08 PM

Thanks and congrats for making it to 4yrs...just don't stop now. :-)