Trailer for David Corbett's DO THEY KNOW I'M RUNNING?

The trailer for the new book is up on YouTube. Some of the photographers I mention below on my wall provided images. Give it a spin. (You'll find associated with it a video for Los Lobos' "The Road to Gila Bend," the lyrics for which provided the book's title.

DO THEY KNOW I'M RUNNING comes out on March 2nd.

Roque Montalvo is wise beyond his eighteen years. Orphaned at birth, a gifted musician, he's stuck in a California backwater, helping his Salvadoran aunt care for his damaged brother, an ex-marine badly wounded in Iraq.

When immigration agents arrest Roque's uncle, the family has nowhere else to turn. Badgered by his street-hardened cousin, Roque agrees to bring the old man back, relying on the criminal gangs that control the dangerous smuggling routes from El Salvador, through Guatemala and Mexico, to the U.S. border.

But his cousin has told Roque only so much. In reality, he will have to transport not just his uncle but two others: an Arab whose intentions are disturbingly vague and a young beauty promised to a Mexican crime lord.

Roque discovers that his journey involves crossing more than one kind of border, and he will be asked time and again to choose between survival and betrayal—of his country, his family, his heart.
Posted by MysterLynch at 3:50 AM No comments:

The Losers - Comics to Movies

Based on the DC/Vertigo comics written by Andy Diggle and drawn by Jock, if this movie is half as good as the comics it will be awesome. Great cast loads of action. I can't wait.

And the graphic novels are great.
Buy The Losers Vol. 1 & 2 (Graphic Novel)

The 2009 Agatha Awards will be given for materials first published in the United States by a living author during the calendar year 2009 (January 1-December 31), either in hardcover, as a paperback original, or e-published by an e-publishing firm.

The Agatha Awards honor the "traditional mystery." That is to say, books best typified by the works of Agatha Christie as well as others. For our purposes, the genre is loosely defined as mysteries that:

•contain no explicit sex
•contain no excessive gore or gratuitous violence
Materials generally classified as "hard-boiled" are not appropriate.

A ballot listing each category's nominees will be given to all attendees of Malice Domestic 22, which will be held April 30 - May 2, 2010. Attendees will vote by secret ballot, the ballots will be tabulated and the winners will be announced at the 2009 Agatha Awards banquet to be held on Saturday, May 1, 2010.

The Sweetness at the Bottom of the Pie, Alan Bradley, Delacorte Press

In the Shadow of Gotham, Stefanie Pintoff, Minotaur Books

“Death Will Trim Your Tree,” Elizabeth Zelvin, The Gift of Murder, Wolfmont Press

The Morgue and Me, John C. Ford, Viking Juvenile

The Case of the Poisoned Pig, Lewis B. Montgomery, Kane Press

The Other Side of Blue, Valerie O. Patterson, Clarion Books

The Case of the Cryptic Crinoline, Nancy Springer, Philomel
Posted by MysterLynch at 5:35 PM No comments:

The International Association of Crime Writers (IACW) has announced the 2010 Hammett Prize Nominations:

IACW/NA awards The Hammett Prize annually for literary excellence in the field of crime-writing, as reflected in a book published in the English language in the U.S. and/or Canada. The winner receives a "Thin Man" trophy, designed by sculptor Peter Boiger. The Hammett Prize will be handed out at the Bloody Words X Mystery Conference in Toronto, Canada. The event runs from May 28-30
Posted by MysterLynch at 5:57 PM No comments: 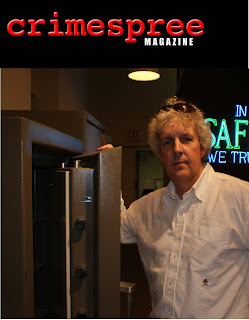 Issue 34 of Crimespree will be dropped off at the Post Office on Wed morning so if you need to subscribe or renew, now's the time.

As you may notice, Steve Hamilton is on the cover.

And we're sorry for the delay, life threw a few curve balls our way.
Posted by Jon The Crime Spree Guy at 3:20 AM No comments: 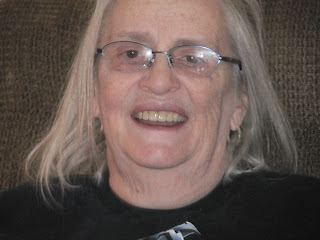 To Foster: To cherish; to promote the growth of; to encourage; to sustain

With the love of her life she raised four brilliant kids and I’d say five. For Drea was Karen’s third daughter, there are no ifs and/or buts about it.

She cherished her family; nieces and nephews, sisters, brothers and in-laws. She encouraged each of us lucky to know her to rise to our full potential and provided us all with a safe haven when we needed nothing more than unconditional love. Her family grew as people needed her. Genes had little to do with family in Karen’s heart. If she could be there for you she was.

She was also a rescuer… Cats, plants, faded fabrics found at yard sales. She gave safe harbor and home to everything.

Our Karen was a lioness. The first night I met the woman who’d become one of my best friends it went like this….. She handed me flowers. Karen was not a fan of cut flowers but knew already that I was. She thanked me for helping Jon host the family & friend gathering. And then she said, “He cleaned his house for you and bought groceries.” It was subtle, it was conversational and I understood, in those words she was telling me how much I meant to her son and that I had better do my very best to never let him down. It was a pact made over Mexican Food.

What she’s given me in the time I’ve known her cannot be measured. Simple kindnesses and huge productions flow through my memory. Family times and moments between just the two of us comingle, making me smile even in these days of sadness.


The greatest gift she’s given me are her children. Dianne, with her unique and perceptive eye on the world. An eye she shares with a talent for painting that the whole world should see. Jennifer, with her gift to spread happiness and laughter all while realizing the cynicism that is the 21st century. Her gift for words is truly remarkable. Paul who expresses his creativity through some of the world’s most amazing food and furniture the likes of which you couldn’t find in the finest shops. And there’s my own marvelous husband. He looks at me every day with a love and trust that comes from watching his parents. He does not say can’t do anything, it isn’t in the genes.

These four marvelous people all embody the best qualities of their two parents. They foster and nurture, they love the outdoors and hours of television. They read and form opinions and they are fiercely loyal. They are my family, a gift from Armand and Karen more amazing than anything else I’ve received in my life.

So Karen Jordan, I will miss you and love you every day of my life but I know your legacy will continue to be the biggest source of joy one person can give to another. I am so happy I had you for the time I did.

Go forth and explore the wilderness with Armand, Chris, Lynn and Buzz. Sleep with Tino curled up by your head. And when you all gather around the fire at night remember two cans is your limit…

Ruth
Posted by ruth the crimespree gal at 12:08 PM 6 comments: