Thompson, Publisher of Busted Flush Press, will continue in his current role, selecting approximately twenty titles a year for publication. The combined companies will have approximately 45 books in print by the end of 2010 with another 20 titles scheduled for spring 2011.
"I am very excited to join forces with Ben and Tyrus Books. I’ve long been a fan of what Tyrus has been doing,” Thompson said,“and I believe Busted Flush Press will be a good fit."
With this acquisition, Busted Flush becomes a wholly owned subsidiary of Tyrus Books. Both companies are distributed to the trade by Consortium Book Sales and Distribution. Terms of the deal were not disclosed.


Type your summary hereType rest of the post here
Posted by Jon The Crime Spree Guy at 6:22 PM 1 comment:

Posted by Jon The Crime Spree Guy at 11:22 AM No comments:

Just who is this Victor Gischler? Where does he come from, what does he do?
And can I buy him a beer? (YES) 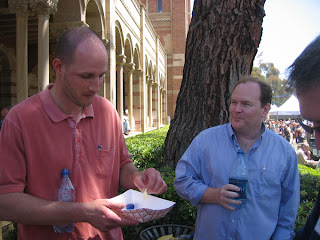 Mrs. Crimespree and I first met Victor Gischler back in 2001 at a crime fiction convention in Washington DC. He was hanging out with folks from a publisher called UGLYTOWN (Jim Pasco and Tom Fassbender). They were getting ready to publish his first book GUN MONKEYS. Jim's hair was green so he stood out a bit. Also with them were Sean Doolittle and Anthony Neil Smith, both awesome crime writers in their own right.

Upon meeting Victor we like him at once, mellow, relaxed and funny as Hell. We would go on to see more of Victor at events and conferences and we would read each of his books. My favorite is PISTOL POETS

, GO-GO GIRLS OF THE APOCALYPSE

and most recently THE DEPUTY

fro Tyrus Books.
In the past few years a lot of my crime writing pals are starting to write comics as well. This is great for me as I love comics. Victor started with a couple one shots, Punisher comes to mind, and was soon doing Deadpool, a run on Punisher

and now he's writing X-Men. In the Punisher and Deadpool in particular you can really see Victor's touch. His sense of humor and his wonderful dialogue.

We were thrilled when he agreed to come up to Chicago for Chicago Comic Con. He'll be around Friday and Saturday , including a Q&A with fellow crime writer Sean Doolittle on Saturday. Stop by and see him, you'll be glad you did.
To find Victor on the Web just go here:
https://twitter.com/VictorGischler
http://www.victorgischler.blogspot.com/
Victor is also doing a signing Friday night at Challengers in Chicago.
The photo to the left was taken by David Hale Smith
Posted by Jon The Crime Spree Guy at 3:05 PM No comments:

CRIMESPREE ISSUE 37 is off in the mail 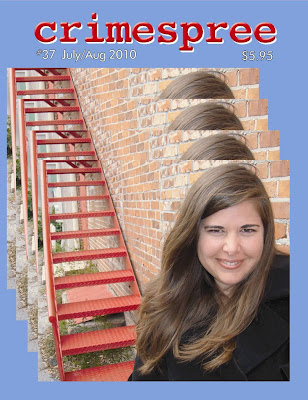 The winners of each of these awards, along with the recipient of this year's Jack Reacher Award will be announced at Bouchercon in San Francisco
Favorite book of 2009
BURY ME DEEP

by Ken Bruen & Reed Farrel Coleman
TRUST NO ONE

by Charlie Huston
THE AMATEURS

by Jamie Freveletti
EVEN by Andrew Grant

A BAD DAY FOR SORRY

by Sophie Littlefield
Ghosts of Belfast

Best in an on-going series for 2009
THE SILENT HOUR

by Peter Temple
Posted by Jon The Crime Spree Guy at 11:43 PM No comments: