Books Sales are something that all uber fans of our genre are aware of. We want the folks we like to read to sell enough books to be asked to write another one. It's that simple. When you're a rabid fan and know a fav has a book out you're going to look at the New York Times Best Seller list. There are more accurate lists out there and there are lists that better trace the momentum of a novel. But the be all, tell all list is and will probably always be the NYTBSL. It's an acronym.

This week I was very interested in the list. And I was informed. Not by publicists or insiders but by a road trip. I knew that Crimespree favorites Lee Child(BAD LUCK AND TROUBLE) and John Connolly both had books coming out. I knew that the wonderful Charlaine Harris newest Skookie Stackhouse(ALL TOGETHER DEAD) had dropped the week before and I was in airports on drop day. Mr. Child's book was being given front and center in Baltimore but in Milwaukee they brought in more of James Pattersons books and kept him front and center. Then it was time to windowshop Baltimore's inner harbour. Lee had a stackout at Barnes and Noble just inside the front entrance. Charlaine had an endcap on the new releases shelving but the happy news for me was John's book, "THE UNQUIET" had been picked for the 20% (members get 30) pick of the week. And in airports, bookstores and the news there was James Patterson. Paperback, Backlist, and the newest, THE 6TH TARGET. Also prominent were Baldacchi, Picoult, Chabon, and Tolkien. Harlan Coben commanded top shelf status. The biggest surprise to me was the continued shelf support of Robert Crais's THE WATCHMAN. In this three week shelf life mentality, Crais's book was still being supported.

And so I looked at the list this morning. And I'm happy for Lee (debuting at #2 this year) and Charlaine (still strong at 16 with an asterik) on week 2. I'm really excited by John Connolly's # 19 on the extended list. He hasn't started touring yet, reviews are just coming in and he's a salesman. His charm and the quality of the book should see this through to his best American sales ever.

There were some very cool other results on the list too. For those who talk Cover, Shelf Placement, and Big Backing as the only thing that matters know that while I saw little of Sandford's INVISIBLE PREY prominently displayed he's at #3. Fans do care. They will seek out their favorites even if they are on the third shelf down.

The sheer number of crime fiction books on the list is also gratifying to any mystery/thriller fan. I count 17 clear cut genre books on the Times list of 35. Ah summer; murder, serial killers, cozies, and global destruction.
And the coolest thing of all, C.J. Box's FREE FIRE making the extended list when his tour hasn't begun to swing yet.

Time at the airports and big bookstores also made me realize how hard it truly is. The sheer number of quality authors who don't get either the print runs, promises from CostCo, or advertising they need to begin to be on the list is heartbreaking. I'll celebrate those whose work I've loved making the list, being on the list at a higher number or just selling more books this time out. But the part of me that is Crimespree will also cheer on the next wave, wait for the next quality writer to emerge upon the list and in the retail outlets in a full on Book Bouquet. It's Memorial Day Weekend, celebrate by visiting a bookstore buying a favorite who's made the list and a favorite who you have to bend down to grab. We ain't lemmings damnit and this weekend we have time to read two.
Ruth
Posted by Jon The Crime Spree Guy at 10:07 AM No comments:

The Starter Wife debuts this weekend on the USA Network. Crimespree received an advanced peek. You may ask why. Here at the office I did. Crimespree/Chick T.V. It hardly seemed simpatico.
That said The Starter Wife is several delightful hours of television. Debra Messing's return to T.V. is a triumph. Will & Grace may have been blessed by a great cast but the formula grew stale. I'd forgotten what a good actress Messing is; why she made an immediate impact on television with a guest starring role on N.Y.P.D. Blue. Her work here appears effortless. Which explains why a Crimespree Publisher sat down to take a cursory glimpse of the show and didn't come up for air for the duration.
The story is based upon the book by Gigi Glazer. Messing plays Hollywood Wife Molly Kagan. We meet Molly on the last day of her marriage. She's making the rounds; school, yoga, lunch with the girls and a Hollywood Premiere.
Hubby calls from a hotel and delivers the news. Quickly shunned by all but her nearest and dearest Molly moves into a pal's Malibu property and gets on with it.
Jon Avnet moves the story forward with a light but sure touch. There is mystery within this tale. You want to know what will happen to Molly, her friends and their spouses. Full of laughs, Hollywood politics, a dab of intrigue and a whole lot of heart The Starter Wife will leave a smile on even the most cynical of lips. And Joe Mantegna rocks as a romantic lead.

I am a huge fan of pulp characters, The Shadow and Doc Savage are at the top of that list along with The Avenger. I originally was introduced to these characters in the 70's by DC Comics, later I saw some stuff on TV and then started picking up the paperbacks.

Pulps have influenced many writers and my reading habits as well. I think that's part of the reason I love the Repairman Jack series and Chesbro's character Mongo.

Well, I just read THE CHINATOWN DEATH CLOUD PERIL by Paul Malmont and it is totally a pul story, punctuated by the addition of pulp writers as charcters. Lester Dent and William Gibson are the main leads with appearances by L Ron Hubbard, Charles WIlliford, Chester Himes and others. And the plot rolls around the murder of HP Lovecraft.

A truly amazing book and hats off to Malmont on all the research he must have done.
A beautful blend of fiction and fantasy.

Out now in trade paperback.

GO BUY IT!
Posted by Jon The Crime Spree Guy at 5:36 PM No comments: 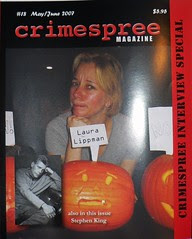 Our next issue is being picked up at the binders tomorrow (Friday) and all things working right it should be at the mailing service and in the post Wed.

We have a bunch of great interviews in this issue icluding cover girl Laura Lippman and Stephen King. Also multiple award winner Rhys Bowen has written an exclusive short story for us. You will also see our multi media man Jeremy up front with an editorial.

This issue puts us into our fourth year with Crimespree. It feels like just yesterday we got started, and let me tell you, we're just getting started!

Heres a look at what's coming

This issue also will see our page count increase by four pages every issue.

This one also has an extra two pages added on the New Mstery Festival in Ownesboro Kentucky taking place in June. Ruth and I will be there, as will Ruth's Bouchercon Co-Chair Judy Bobolik.

The girls will also be in Baltimore next week Tuesday through Thursday setting up some Bouchercon stuff. If you're in the area and are interested in being a volunteer drop us a line.

As I've stated here before I don't keep up with network television, I tend to wait for the DVDs of the shows I'm interested in. NCIS is one I've been curious about for a while, in part because of the reviews in Crimespree, and also because it's creator, David Bellesario did Magnum, one of my all time favorite shows. Gerald So's review of Season Three on DVD finally pushed me that extra bit and I ordered Season One. I've just ordered Season's two and three.

I really enjoy the show for a number of different reasons. Being a spin off of JAG it has some cool aspects of that show, like episodes taking place in exotic locales such as aircraft carriers. And I have to say, I'm a sucker for watching the fighter planes. It also has great forensics in the show, an umlike CSI, it doesn't feel made up and glamourized. In fact, the woman who plays Abby, the tech they use for forensics actually studied forensics and really knows what shes talking about. They avoid the Hollywood cliches that make me crazy on the CSI shows.

The cast is also a huge factor here. Mark Harmon has always been one of my favorite people to watch on TV and this role suits him quite nicely. As special agent Jethro Gibbs, a Marine with a military point ov view who leads our team for the NCIS. He's gruff, three times divorced and driven. He tends to do things old school and is usually not very patient. He is open minded enough though to listen to them younger members of his team.

David McCallum plays Dr. Mallard, the coroner for the squad. An older man of vast and worldly experience he adds a real nice touch with his sometimes light hearted approach. But he's aslo a total pro and very good at what he does.

Michael Weatherly is has been on the team for two years when we first meet him. A former cop in Baltimore among other places he is a bit of a joker and a ladies man. Though sometimes I feel like yelling at the TV for him to chil out and get to work, it's usually pre-empted by a smack in the head by Gibbs. Before to long though you see his value on the team and its understandable why he's there.

I really like Pauley Perrette as Abby Sciute. Forensics genius and Goth Girl she is just a jopy to wath. She loves her job and is is amazing at it.

The rest of the cast is great to. Sean Murrey as a new agent how at first seems like a real geek boy, and in the first two seasons, former Secret Service agent Caitlin "Kate" Todd played by Sasha Alexander. She is almost over qualified for her spot on the team and can be damn hard core when needed.

Not sure what I think of the additionin later seasons of Lauren Holly as Gibb's boss. She seems too young to me and I can't get the bubbley roles she has played out of my head. I will reserve judgemnet till I actually see her on the show later this week.

I also like the recurring role of the bad ass double agent who may be a good guy but is probably a bad guy, Ari Haswari played by Rudolph Martin. Good or bad, I'm waiting for him to get a bullet to the head.

The show is treated with respect by the writers, things carry form show to show and season to season. Things they do have consequences and it comes off feeling pretty realistic.

I'm definitly hooked on the show and I'm kind of glad i waited. Now in the course of one week, I can watch all first three seasons back to back.