A short comic strip for Crimespree #35

Stay tuned for more Lego inspired strips doing reviews and interviews and more!
Posted by Jon The Crime Spree Guy at 3:38 AM 2 comments:

Author Tasha Alexander Signs New Minotaur Deal To Continue Popular Lady Emily Series
CHICAGO--Award-winning historic fiction author Tasha Alexander has signed a new two-book deal with St. Martin’s Minotaur to continue her popular Lady Emily suspense series.
The deal will extend the series to seven books.
“I’m excited to continue writing for St. Martin’s Minotaur,” said Alexander. “And to further explore Emily's world. When I began my first book seven years ago I hardly dared hope I could turn something I loved into such a long-running series. I have the readers to thank. They have stuck by Emily.”
Alexander has published four books in the suspenseful series set in the Victorian England period. The most recent, TEARS OF PEARL, came out last September, her first with Minotaur. Alexander’s fifth in the series, DANGEROUS TO KNOW, comes out in the fall. The Notre Dame graduate also wrote ELIZABETH THE GOLDEN AGE, the companion book to the Cate Blanchett movie in 2007.
Alexander burst on the literary scene in 2005 with AND ONLY TO DECEIVE for Harper Morrow, also the publisher of the second and third Lady Emily books, A POISONED SEASON and A FATAL WALTZ.
Alexander resides in Chicago and is engaged to thriller author Andrew Grant.
Media contact Tom Robinson www.authorandbookmedia.com
Posted by Jon The Crime Spree Guy at 3:23 PM No comments: 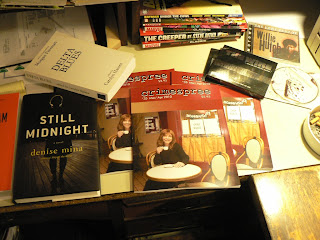 Two hours ago the binder taped up the last box and loaded into the back of a truck, twenty minutes ago the boxes were dropped off here, and now we have issue 35 in our crime-stained hands. Once packed up for the mailing service they should see the post office by Friday and then off into the world to make it on there own. Issue 35 has a great cover story with CARA Black, one of our all time favorite ladies of mystery who has just published novel #10!
Here's the rundown on contents:
FROM THE EDITOR BY RUTH JORDAN
VIEWER MAIL (NEW) -NEWS BITS
THE HOT TICKET BY TONY PERONA
WHEN THE POLICE ARE GANGSTERS BY PAT BROWN
FOOTPRINTS: AGATHA CHRISTIE BY RUTH JORDAN
ISTANBUL: CRIMES OF SULTANS AND DETECTIVES BY AYO ONATADE
CRIMESPREE ON TAP: BY BLAKE CROUCH
CLASSIFIED DOSSIER: JAMES BOND’S (LITERARY) AGENT BY RAYMOND BENSON COVER STORY - CARA BLACK INTERVIEWED
FICTION: BRONX SUMMER 1971 BY STEVEN TORRES
NO SUCH THING AS SMOOTH SAILING BY JP WHITE
TWO DECADES OF NOIR IN FEST BY MAXIM JAKUBOWSKI
DIALOGUE WITH DECLAN BY DECLAN BURKE
GREAT PIS ON FILM BY MICHAEL A BLACK
CRAIG’S JOINT BY CRAIG MCDONALD
REED FARREL COLEMAN
MACHISMO BY STEVEN TORRES
THE MARY SUE METASCRIPT: MEMOIR OF A GRAPHIC NOVEL BY JON EVANS
AMY’S MYSTERIES FOR TEENS BY AMY ALESSIO
SUNSHINE AND CRIME BY MICHAEL LISTER
CRIME AND IDIOCY BY JEN JORDAN
EYE ON HOLLYWOOD BY JEREMY LYNCH
DVD REVIEWS
INTERVIEW WITH PETER MILLIGAN BY JON JORDAN
AUDIO BOOKS ~ BUZZ BIN AND BOOK REVIEWS
THE BRONX KILL PREVIEW FROM VERTIGO CRIME
CRIMESPREE ON COMICS
COOKING WITH CRIMESPREE WITH JERI WESTERSON!!!


So if you need to hook up with a subscription or a renewal go here:
CRIMESPREE SUBSCRIPTION PAGE
As an added springtime with Cara bonus, anyone subscribing or renewing between now and April 1st will get a bonus 7th issue added to their subscription
Posted by Jon The Crime Spree Guy at 4:45 PM No comments:

We were recently sent a couple cool books from Titan publishing that tie in with movies.

YIPPEE KI-YAY MOVIEGOER by Vern (of Ain't It Cool News)is a book of Bad Ass cinema full of great essays on movies we love. Obviously some special love for Bruce Willis. From horror to action this covers it all. Loads of fun if you like action. This book isn't pretending that these movies are all winners or even great movies. But Vern is expressing his love of these films for what they are, good entertainment. Some go beyond that and well they should. This is a book about the movies I love by I dude who loves them the same way.

Also from Titan Books is a movie on the making of KICK ASS a movie based on a comic by Mark Millar. Tons of photos on production and the comic this is a wonderful companion piece to the comic and movie. The plot of the story is a kid who loves comics decides he wants to be a superhero for real and it doesn't go well for him to start with. before long he's stopping crimes and getting his ass kicked. Eventually others are inspired to do the same. It's crazy and violent and actually a lot of fun.
The book is a nice look at the book and movie and I think is a nice thing to have as a fan of the comic and I'm sure I'm going to dig the movie.
Mark Millar also wrote Wanted, which turned out to be a damn fun movie.
Posted by Jon The Crime Spree Guy at 3:53 PM 1 comment:

Announcement from Tyrus Books:
Tyrus Books is delighted that our spring titles are at the printer!
Well, the first spring titles, HELLO KITTY MUST DIE, THE DEPUTY, and DELTA BLUES, are at the printer, and the rest are soon to follow. In this time of anticipating holding the finished books in our hands, we start to get really, really excited about all of the wonderful stories about to be released into the world. (Alison especially, since she's spent so much time poring over paper samples and color wheels.)
Come share in our excitement
-- preorder your copies of Tyrus's books today, won't you?
We've got our very own shopping cart capabilities on the site now, and we'd love to send you the books that come to us direct from the printer! You can of course also preorder at your favorite indie, or at amazon, too.
But buying direct from Tyrus means that you're letting us know just how important indie publishing is to you. And because we appreciate each and every one of our readers, we want to share the love.
Use the code "crimespreereader" for $3 off each book you purchase! Each package is hand-packed by Ben, with love (and probably with a little Journey on in the background).
Posted by Jon The Crime Spree Guy at 4:25 PM 1 comment:

A quote to live by 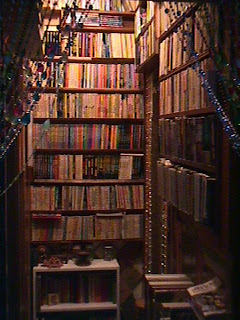 A library implies an act of faith. ~ Victor Hugo

Posted by Jon The Crime Spree Guy at 4:59 PM No comments:

Miles Fisher - This Must Be The Place

Theodor Geisel was born on this day in 1904, and as far as I'm concerned it should be a national holiday.

Originally getting in trouble for his sense of humor with the school paper Geisel went on to win an Oscar for short subject. After working in advertising he rose to a challenge of writing a book to help kids learn to read, and the rest is history.

I read today because of this great man. The first books I ever owned were his. Sneetches and Yertle and Horton were a part of my childhood, and this was before seeing the cartoons. Grinch is a part of our vocabulary and culture. Even today millions of children are still discovering his books. I still read the books and buy copies for youngsters I know. I have a whole shelf full of the stuffed animals based on his characters. Partof who I am is because of this genius.

So thank you sir and happy birthday. 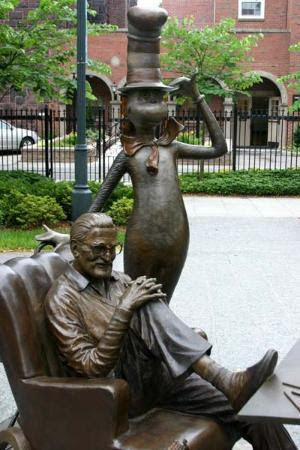 Looking for a place to go a celebrate the great man? He has a park dedicated to him!
The Dr. Seuss National Memorial Park