A large portion of my adult life, Hell, my entire life, has been influenced by what I watch on television and on the big screen. I love movies. I love a lot of television. And it's no real secret that there is big money involved.
So what I want to know is why don't the powers that be want to share some of it with the writers? Only a fool would think that these wonderful shows and movies get made with out great scripts.

Of course Time Warner's Entertainment Weekly is covering the strike. And they should. It will have a major impact on a lot of what they cover. But why is it that in the article about the strike all they show are the stars? And mostly good looking women at that. And Jay Leno, who is not a good looking woman.

I heard some numbers about how much the writers get from DVD sales compared to what the designer of the DVD gets and I think it's a crime. i also beleive that there will be big money in internet viewing of show and they deserve a piece of that, and a damn fair piece at that.

I don't understand the attraction to watching on a computer or a cell phone or some other small device all the kids have, I want to watch in a comfy chair on a big tv, but that's a different rant.

So what will television do? I've heard rumors of more reality television coming our way.
Super.
Why not just go ioff the air now? Haven't these people dameged the brains of Americans enough with this damn Big Brother and Survivor and American Idol? How much less do they want us to think? I'm guessing not at all. Reality TV isn't even reality any more. Now it's a bunch of disfunctional losers trying to get on TV by eithe rbeing the most whiney or the bitchiest or the cruelest. The way these people behave is not the way people should conduct themselves. And yet there is a whole genreationthinking it's ok to be an asshole because thes lame networks don't want to pay for writers to write real programing when they can just film people behaving badly.
TV viewing is down? No surprise. Give us back our well written prgramming. And while you're at it maybe cut back on the damn commercials? Why do so many people watch on DVD or TiVO or DVR? Because they are sick to death of comercials!
And the film industry is putting out it's share of stinkers too. They want to remake Death Wish with Stallone? Are you f*&king kidding me?!!?? Hey studio heads! Pay the writers what they want and let them write something new for you. Remember the remake of Psycho? That worked out real well didn't it?

Ok
This is getting away from me.

I support the writers in their strike. One hundered percent. My television will be tuning in to nothing but DVDs tll the strike is over. 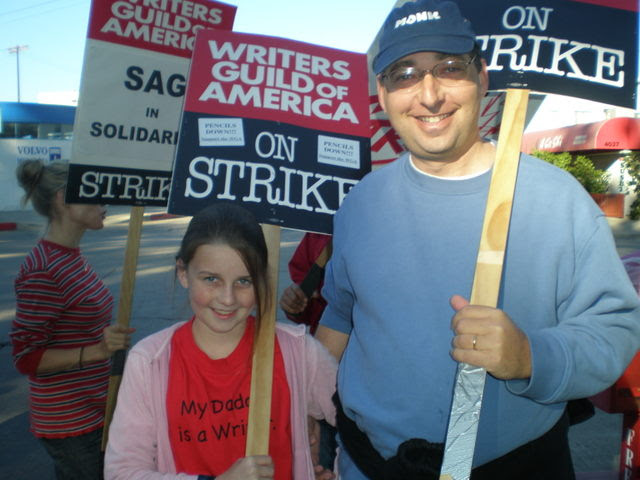 And hey! Entertainment Weekly!?!?? How about a shot of Lee Goldberg picketing! He's a real working writer, not an actor showing support.

I suggest everone stop watching TV. Watch DVDs instead, or better yet, read a book!

For up tp date coverage read Lee Goldberg’s Blog
Posted by Jon The Crime Spree Guy at 12:12 AM

I think the writers are getting screwed on DVD royalties, too.

And Lee's not just a writer, he's a producer, too, which means he can exploit himself! That alone should merit some attention.

Show your Support for the Writers Strike!!!