NYPD BLUE - the show that broke my heart 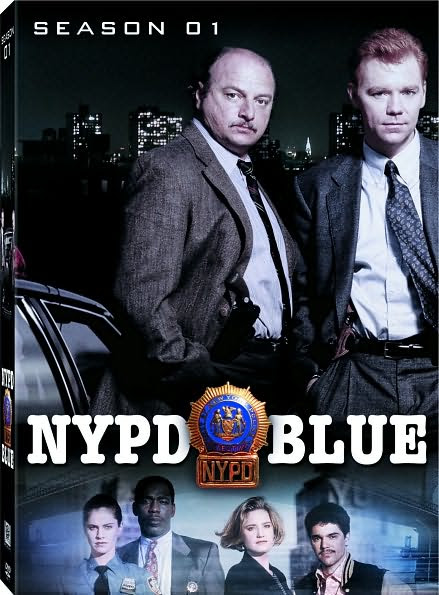 Recently the wonderful woman I share my life with and I ran across seasons i and 2 of NYPD BLUE on DVD for $20, a nice cheap price (Target). I haven't seen then since they first aired and I remember digging it a lot. After watching the first two seasons I now remember why I stopped watching. The first 2 are good, the decline really starts towards the end of season two.
I think there is a good reason why they stopped the DVDs after season 4

Reasons why the show lost me:

1 The show started to lose me for a few reasons. At first the cop speak was cool, Kelly and Sipowitz talked that way and it was a cool idea. But soon everyone did it and it got silly.

2 NYPD Blue started to get further and further away from cop stuff. I liked having two leads and secondary characters. I hated Medavoy and thought he was a spineless wimp who whined too much. Martinez started out cool, a rookie detective learning from a mentor. But he too started to get all wimpy.
"Greg, I think she likes me, should I ask her out?"
It was like a bad scene out of high school.

which leads me to my biggest problem
3 All the characters in the squad room dating each other. Come on! These people don't have contact with anyone else? They can only date each other? And why all the romance? Maybe following your two main lead characters is fine, but I don't want to know about the rest of them, it turns the whole thing into a soap opera, and at least Days Of Our Lives never pretended to be a cop show.

4 The interrogations. I understand that the bad guys aren't normally too bright, but there is no way they would all be stupid enough to fall for the tired old "help yourself out here" routine. I've not been in that position but I can tell you that I would be saying one line over and over to these bullies. GET ME A LAWYER. It went beyond unbelievable, it was a joke!

5 Sipowitz quits the booze and they bring in a second alcoholic story line right away, and done very lamely the second time. I understand it was meant to show Andy's growth asa character by having him be the mentor, but come on!

6 Forced nude scenes. Did every one on the show really need to show their ass? Really? Dennis Franz naked. Really?

I could go on but I'm just getting mad. This show really had such potential. But typical of Steven Bochco, he loses interest and the writers on the show flounder. It is hard to believe that someone as talented as David Milch was involved in this after the second season. "Deadwood" was amazing! His earlier work( Hill Street Blues , Murder One ) was great. Hell, this started out great.

And for the record, NYPD Blue has made it so I hate Kim Delaney so much I can't watch in anything!

This is a show that reall started out wonderful and so full of possibilities and then it just sat back and rode it's own glory after season two.

I'd look for the first two seasons though, they are great up till about the last disc of season two.

or get these great shows instead!
Hill Street Blues - Season 2

I agree with you comments. The only other thing/person that put me off NYPD Blue was of course David Caruso. Irritating comes to mind. It is the same reason why he annoys me in CSI: Miami.

I remember first noting Caruso as "talent" in another Bochco production, Hill Street Blues. As one of the gang members who figured in the "gang negotiations" story arch he was wonderful. Rewatching Hill Street with Jon and seeing that talent fully realized was a treat. He was singular, fresh and almost Method in his acting. And all the things I hate about all bochco (really, is there anyone else who gives female leads such a great background and has them whimpering on behalf of their pussies within a season with such regularity?Even Candice Bergen?)
But Caruso, he grabbed leading man in that first season, with his nontraditional looks and simple Irish heart. With Mom on Christmas Eve, with Sherry Stringfield after the Mob shooting, with 306... even with Amy Brenniman and absolutely with Andy Sipowitz... This was a 600 level class in acting. The bum rap comes later as he dances out of his contract. And really, look at Bochco's history. Even with great writers on board he has always managed to stick his finger in the pie until your characters are destroyed. Caruso probably did the best possible thing for himself and for my memories.

Wow - I obviously enjoyed this series more than you did, although I agree with many of your points. To me, the show was Caruso and Franz, and when Caruso left, the show left with him. He's just too central to the show to take him out of it and still have any show left.

The shows with Caruso are amazing, however. I dislike his CSI role very much, but in NYPD, Caruso is on fire. You can't take your eyes off the guy, and unlike most Cop television characters, he really did seem like he could kick your ass. When John Wesley Shipp guest starred as the steroid-laced cop, and he and Caruso get into it verbally, Caruso's "if we go, we go" line still reverberates in my head as one of the best toughguy lines of all time. You just don't take on a guy with that much ice in his veins. Killer stuff.

In order to understand Caruso's talent, it's helpful to watch not only his stint on HSB but the stuff he made with Abel Ferrara - most notably the pilot to CRIME STORY and the movies CHINA GIRL and especially KING OF NEW YORK. It's amazing; no matter what happens - even when, in KoNY, Christopher Walken is being an amazing-as-fuck genius ("come and see me at the Plaza Hotel!"), there's Caruso, the livest wire, ready to go unhinged and fuck shit up. It's too bad what happened to him post-NYPD because he basically calficied, but during the mid-80s to early 90s, he was beautifully unpredictable to watch.

I agree with Jay, Caruso really made the show work for me, and its true, you believed he would kick ass.

His early work really is great.