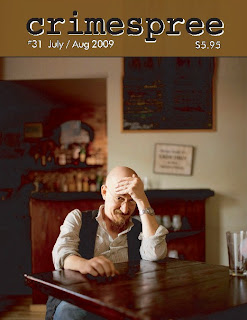 Our latest issue, 31, is at the binders as I type and will be shipping the week of July 13th.

We're really happy with this issue and a big part of that starts on the cover. I'm the first to admit that I love everything written by Brian Azzarello, but July is pretty significant. he has the last trade collection of 100 Bullets out, a short story in Uncage Me, the latest anthology from Jen Jordan (order Uncage Me now!

) and his run on Batman in the Wednesday comics has just started. He also has some exciting things coming up and he talks about it right here in Crimespree with our pal Sean Chercover.
Now, as much as I love these guys, I like hanging out with them and I love seeing them around, I would really rather have them both writing all the time so I have more to read, so it was a difficult decision to ask them both to stop writing long enough to do this, but the end result is really something special.

We also have a whole lot of other Crimespree goodness in this issue for you.
Here's the line up:
Editorial By Jen Jordan
News Bites
Ayo Onatade talks about Crimefest
Married Amateur Sleuths by EJ Rand
FICTION- Bullies By Bryon Leigh

We're not sitting on our backsides either now that this one is done. I'm in the process of doing 6 interviews, including Mike Carey, Robert Ward, Rick Geary, and more. Ruth is also interviewing Gerald Browne!

We'll be at Bouchercon.
August 6th -9th
We'll also be at Chicago Comic Con, also known as Wizard World Chicago with some of our friends, including Brian Azzarello, Tim Broderick, Jack Kilborn, RD Hall, Mark Kidwell, B. Clay Moore and Jason Aaron and Raymond Benson and Marcus Sakey. We'll have a booth over in the Exhibitor area right as you walk in.

Posted by Jon The Crime Spree Guy at 8:46 PM

Thanks for treating comics with the respect that they deserve, Jon! The Azzarello interview sounds terrific!

It's a strange and exciting time always at Casa Jordan, but this cover story? Close to my heart. I still remember the first time I met "Azz"(for the record, he'll always be Brian to me) and I hope our cover story with the short story in "UNCAGE ME" will make the folks in the Crime fiction community who don't already know him get the same buzz as we have here for the new Vertigo Crime Line. Pairing Brian Azzarello with Ian Rankin for this first wave is cornucopia. Two of my favorite NOIR writers who come to the craft from such entirely different dynamics.
So while AZZ gets ready for Comic-Con and a very fine send off for his 100 Bullets series with new projects too numerous to mention here I salute him, Jen Jordan for explaining the "cozy concept" to him and DC Comics for seeing the true anchor he is for this brilliant experiment.

And I most certainly salute his interviewer, Sean Chercover. Sean is traveling the Globe over the next few weeks. His short stories and the novel, TRIGGER CITY having been nominated between them, for just about every damned mystery award there is on the planet. If you read this newish writer, you'll immediately know why. A style so uniquely his own and yet so very reverent to those who've come before... Sean Chercover is first and foremost my friend. That he sees in everything he reads , the beauty of a craft waiting to be captured, is no surprise. That 100 Bullets was for Sean a worthwhile expenditure of time he really doesn't have right now. Natural. He and Brian, new friends? Expected.

But to see read this cover story, two men at the top of their game just chatting and realizing that both have only just begun. It is at its very core, what we've tried to make Crimespree be for every issue for five years.

A salute you both Gentlmen. Congratulate you on this past year, hope for wildly deserved accolades to come your way.... but mostly, I just want to read what you present to the reader next. You are that special, to my heart and my eyes.

Comics deserve a whole lot of respect, I think there is a lot of great crime writing out there and comics is a big part of it.