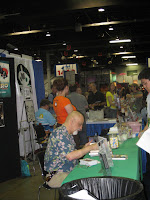 10 favorite moments inside the con

1. Meeting Mike Gold & John Ostrander (the bomb, baby)
2. Watching Jill Thompson (shero, extrodanairre) teach kids to draw.
3. Short conversation with Lou Ferrigno (glad I didn’t make him angry)
4. Seeing a fan of the James Bond Companion Book be able to go totally fan boy on Raymond Benson.
5. Sending two sailors about to ship out away with a big box of books and comics.
6. Tim Broderick could work as a Circus Hawker but seeing his daughters sell out their first comic? Even better.
7. Jason Aaron & B.Clay Moore both pimping Neil Anthony Smith’s Yellow Medicine.
8. Marcus Sakey (Good People) and Jack Kilborn (Afraid) putting free books into the hands of the crowd, spreading the word that there’s room for all kinds of reading….
9. Brian Azzarello signed a what?
10. Edward James Olmos & Michael Hogan? Frak Me!!

That’s right, we attended the con this year as an exhibitor not having any idea what to expect. The moments above may be the first to come to mind but are certainly not the only ones. Thursday’s set up went so smoothly and we were able to meet all of our neighbors on that first night. Westfield Comics, The SuicideGirls and Comic4Sight all rocked it. Despite 90 + temperatures costumes were out in full force, my absolute favorites being a Rorshcach and Night Owl couple who interpreted their characters to perfection.
On Thursday I also had my first glimpse of George Perez. I may have come late to this whole comic thing but Jon turned me onto Perez early in the catch up phase. I believe I was more awed at this moment than any other of the four day event. 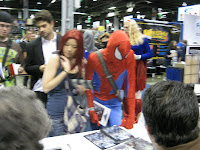 Sharing much of our weekend with RD Hall (follow RD on Twitter)and Mark Kidwell was perfection. These are the two gentlemen who along with their lovely wives made our first Wizard World Chicago such a great experience. Their careers are both making leaps and bounds and it’s fabulous to see. RD was a partner in our table and Mark came to sign for us despite an Artist Alley that was so busy we probably cost him a couple of hundred dollars. 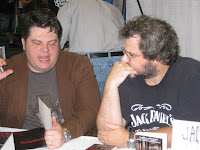 Both Mark and RD are huge Jack Kilborn/ JA Konrath fans and the fact that they were able to meet and I got to see it? Another fantastical moment. 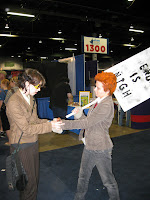 Our best new friends of the con are without a doubt the folks over at pwndcast.com . Young, energetic and spreading the word on everything Con, we still had a chance to begin a great friendship. Check out their site.
The old friends came out in force to support us and experience the con; from Mike Black to Brian Pinkerton the list of folks who stopped by reads like an MWA Midwest Chapter who’s who. The fact that these excellent writers all see the viability of bringing their prose to this venue made Jon and I very happy. The crossover potential between these creative outlets is the reason we tried this, the response is the reason we’re already planning for ways to do it better next year.
What can I say about Jason Aaron and B.Clay Moore? These two outstanding talents shared their con with Crimespree, signing books for fans at the Crimespree booth. My only wish is that we could have created bigger lines for them. These two are a lot of the reason I’ve begun to read graphic novels at all. 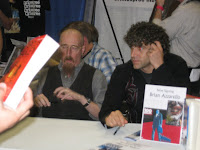 And then there is the force that’s Brian Azzarello. Fresh off of the award winning 100 Bullets and the phenomenal JOKER graphic novel, Az came to the Crimespree table for two signing sessions, the lines were long and I can only imagine how long they would have gotten had everyone who was looking for our booth would have found it. We were pleased to be able to offer Brian’s first prose work ( Roy, a short story in the new anthology UNCAGE ME , edited by Jen Jordan) to all of his fans.

To be continued….
Posted by ruth the crimespree gal at 10:35 AM

let us know if you need the links for the archived video of your interview for your site contact us at info(at)pwndcast.com