So a wonderful fellow blogger and all around groovy human being, Patti over at Pattinase asked if we wold like to contribute to her Friday tradition. Well Ruth jumped at the chance: 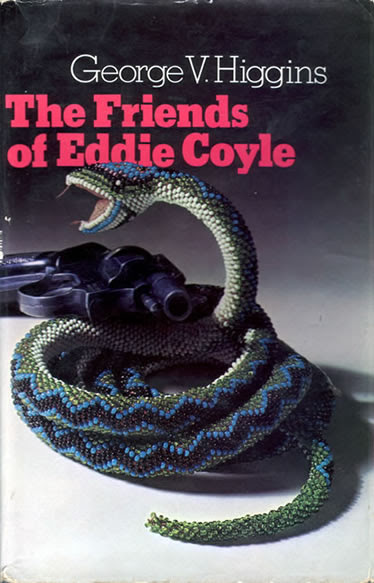 The Friends of Eddie Coyle by George V. Higgins

We all remember the glorious day when our parents said, “you’re ready for “our” books.” There are many variations of this I know, but you remember that first experience with a bookcase full of the battered paper backs that stood there inviting you to discover a new world of reading. The summer I moved away from the classics and was allowed access to my parents stash was glorious. I read all kinds of books that will remain amongst my favorites forever but only one traveled with me, wherever I went , until I returned it to them in the ‘90s. When I opened The Friends of Eddie Coyle by George V. Higgins I was introduced to the anti hero. Eddie, a small time hood with zero luck. When Eddie gets popped by the feds his options begin to get smaller, the danger more palpable. The cops and crooks in this book were unlike any others I had read. There was no honor, there wasn’t any gallantry, nor was there a big score.

Two things made this book sing to me, first was location. I knew Boston, knew route seven. So did Mr. Higgins. As Eddie traveled through the narrative of this book. I was with him. The book is the first I read where setting became character. Where with a few descriptive sentences, I traveled the road with the people in Higgins fictional world. It was mine, amped up and inhabited by gangsters.

The dialogue in the Friends Of Eddie Coyle did more than convey words, it made me part of the conversation. I’d heard these people with their BAWSTAN dialect, could read this narrative as though I were there. George V. Higgins was the first contemporary master of dialogue I read and spoiled me for all to come.

All this work still comes together for me, I still want Eddie to wiggle his way out of the mess that is his world. Can he stay out of jail and not be branded as a snitch? This book introduced me to everyman crook and the intimate story. Almost 40 years later, I recommend this book to all who write and read Crime Fiction. I didn’t know it the day I pulled that book from the shelf but Higgins was amongst the first to tap into this style of writing and it opened up a whole new style of crime fiction. One admired by many who write and read today. If you haven’t read it yet…..

I'd like to throw in a title which was written in 1903 and originally published by Henneberry Company of Chicago. THE STORY OF COLE YOUNGER by Himself ( meaning of course Cole Younger). The edition I read is published by the Minnesota Historical Society Press and has a wonderful forward by Marley Brant.

I've been fascinated by the James Gang and The Younger Gang since I was a wee lad, I've watched most of the movies and read a lot of books about them. There is no doubt that these were some rough dudes, and depending who you listen to they were ruthless or misunderstood.

The real interesting thing about this book is that it brings to mind something a friend of mine named Brian said. "No one thinks they are the villain in their own story" This is certainly the case here as Cole spends most of the book claiming he didn't do it. It is however great reading as it's almost fiction by Cole about himself. His take on the events and his seeming self denial abouth the events is actually rather timeless. This is a great book for anyone interested in crime fiction.
Jon

Thanks so much for contributing this wonderful look at one of the great books in crime fiction.