Andrew Grant's first book, EVEN is in stores now. (And signed copies available at some great independent bookstores, like Mystery One in Milwaukee) 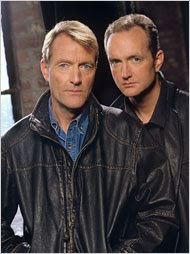 He was recently featured in the New York Times with his brother Lee Child. (But we interviewed him first!


Jon Jordan: Even comes out May 12th, is this the first book you wrote, or the first one you sold?

JJ: How long did it take to write EVEN?

AG: The basic ideas for EVEN were taking shape in my head for a couple of years before I quit my job, but once I was ‘free’ it took me almost exactly eight months to write the book.

JJ: It feels like a series to me, is that the case?

AG: Yes. Right from the outset EVEN was conceived as the first in a long-running series. I hope the world will want to see a lot more of David Trevellyan…

JJ: How did you decide on the type of character to write? Is it based on what you enjoy reading and watching? 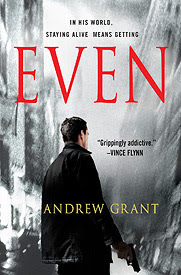 JJ: And on that subject, what do you enjoy reading?

AG: I like movies in which the writer and director try to find new or unusual ways to tell their story – for example Memento with Guy Pearce and Joe Pantoliano, where a twist of the plot leads them to start at the end and move backwards in time…

AG: In my case, it’s what you have to do to pay the bills after running a small, independent theatre company for eighteen months!
“Telecommunications” covers a multitude of sins, from the mundane to the top-secret. For my part, I was always involved in the ‘business’ side of the industry – dealing with companies and government departments rather than individuals and households. For the first dozen or so years I worked directly with clients such as banks, insurance companies and other agencies, and in the final phase of my career I was responsible for developing specialized management information packages for each of them. It was a truly crazy environment, so all in all, I found corporate life to be an excellent training ground for creating a fantasy world of my own…

JJ: What are you working on now?

AG: The second David Trevellyan thriller. Still in New York, still in danger, and still on the wrong side of the lines, can Trevellyan placate his bosses and find a way back into the fold? Or will the situation call for the kind of justice he can best dispense when he acts alone?

JJ: Any thoughts on going out on your first author tour? Have you heard any tips from anyone?

AG: I love the idea of going out on tour. After spending years presenting superficial details about a faceless corporation’s products and services, I can’t wait for the opportunity to talk in depth about something I care about so passionately. As for advice, I’ve been told to wear comfortable shoes and not to expect much sleep! 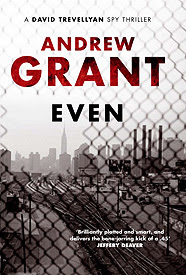 JJ: Where are you on research? Are you a hands on researcher or more of a Google guy?

AG: I like both. For straightforward facts – such as the location of a particular Magritte painting or the correct format for the social security numbers I used in EVEN – you really can’t beat the internet. On the other hand, I think that anything to do with atmosphere or emotion has to be experienced firsthand to be convincing.

So there you go, a quick interview with a great new author, now go forth and Buy EVEN by Andrew Grant

I saw Andrew Grant a few weeks ago leaving a pharmacy, i went in asking the clerk (who's a friend of mine) what he got... 2 simple words Generic Cialis