Here are a few of the fine books coming from Minotaur Books this summer.
Also keep your eyes open for Joseph Finder's VANISHED in Aug!

THE ASSAILANT by James Patrick Hunt is a police procedural which is a study in suspense. While tracking a killer Lt. Hastings is frustrated by slow movement on the case, so is the killer who decides to move things a long by contacting the police. Escorts are dropping and Hastings needs to put a stop to this cat and mouse game with a suspect whop enjoys what he does a little too much. Dark fun with great characters.
Buy the The Assailant

AWAKENING by S.J. Bolton is everything I love about British books, Gothic and creepy, great characters and a wonderful small village setting.Clara Benning lives and works in a small village as a vet for wild animals. She likes her job and is good at it working day to day saving badgers and other critters injured in the area. The book opens with a typical starting day going south quickly as she is called in to rescue an infant from a venomous snake. She soon discovers that there is a rash of the snake incidents and there is obviously something behind them besides nature striking back, this is confirmed when she captures a deadly snake native only to Australia. She teams up with a strange neighbor to discover what is going on and as it’s a small town feathers are ruffled as they uncover some old secrets. Danger ensues. Bolton is a strong writer and this story drew me in quick because the characters are compelling and real. She does a job with the suspense worthy of Hitchcock and keeps you on edge right to the end. She also manages to make feel damn uneasy and , well the only word for it is squirmy. A truly masterful piece of work.
Buy Awakening

Steve Hockensmith's series with Big Red and Old Red solving mysteries out west because they love Sherlock Holmes is such a great series. Book four is out in Huky and it is another winner. The boys are heading to Texas to find out what really happened to a girlfriend who was murdered.
You can Buy The Crack in the Lens

and his earlier books as well
Buy Holmes on the Range

Buy On the Wrong Track

DOPE THIEF by Dennis Tafoya is a crime fiction book that plays on the idea that if you rob bad guys they won't go to the cops. The main characters Ray and Manny aren't hardened criminals and it is easy to want to like them. But like most plans of this sort things go wrong. Tafoya does a nice job of increasing the tension with our boys on the run and wronged drug dealers on their tail. The book also explores the whys of the criminal endeavor and lets us look in to the Ray's head to see his reasons for taking this crazy chance.
A very nice debut novel for this author.
Buy Dope Thief

THE EXTRA (Minotaur Books) by Elizabeth Sims is another in her series featuring amateur sleuth Rita Farmer. Working on a movie as an extra dressed like a cop Rita stumbles across an assault and steps in to help. Things lead her back to a place she turned to for help years ago, a mission run by the assault victim’s grandmother, the it’s a different place now and something is wrong. Rita steps in to help. Written with a strong voice and wonderful characters THE EXTRA as a book that goes down easy, like a perfect cup of coffee. This is on the heels of last year's The Actress.
Buy The Extra (A Rita Farmer Mystery)

LAST KNOWN ADDRESS is the latest from Theresa Schwegel. Detective Sloane Pearson is a cop who is used to getting treated like she's inferior because she's blond, but in her latest case she does a bit more to cause problems at work. In particular while working a rape case she tells a reporter that they have a serial rapist on the loose and causes a panic. The only thing she can do to redeem herself is catch the bad guy.
Schwegel is a great new author and this latest is fast paced and edge of your seat reading.
Buy Last Known Address

Get her earlier books too:
Buy Probable Cause 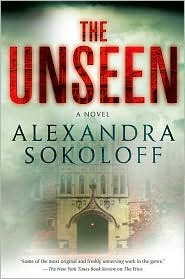 Alexandra Sokoloff once again keeps sleep from coming with this “read in one sitting” book. THE UNSEEN (St. Martin’s Press) is set at Duke University and uses the Rhine experiments as it’s spark. Laurel wants to duplicate the experiment but is unaware of just how horribly it ended the first time. Sokoloff has delivered a book that is both suspenseful and creepy as Hell. Read this book, but leave the lights on.
Buy The Unseen

Also by Alexandra: Buy The Harrowing