LIFE ON MARS from UK to US

Well, as of tonight I've seen both versions of Life On Mars. The original UK version ran for two series (seasons) and it ended in a very interesting and talked about way. It is not definitive but lets the viewer draw their own conclusions. I loved it.

So, I hear they are planning a US version and I think "well that's just dumb"
The US television version of Coupling sucked. The didn't do too great with any number of other shows, and really, why screw with something so perfect?

Last week I saw the US version of Life on Mars at a DVD friendly store, and at a nice price. I like the cast so I figured what the Hell, how bad can it be? Turns out it isn't bad at all.

I have to say, after seeing the original cast line up I'm glad they made the changes they did.

Going in I expected a cheap rip off duplicating it or really butchering it. Sure enough, the first few episodes were carbon copies, right down to the dialogue. And then something magic happened. The show got notice that they were canceled. Normally bad news. But in this case they knew they had limited episodes to wrap it up and they did something truly amazing. They came up with clever and new ways to finish the story. I sat watching the last ten miinutes of the show in awe.
They pulled it off,they made it work.
I honestly don't know if they would have done so well had the show continued. But working under the gun they excelled and in my opinion truly succeeded. 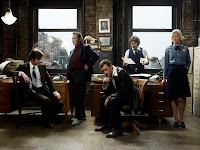 The UK version has some advantages. John Sim as Sam Tyler was inspired. His portrayal of Sam was a man haunted and confused trying to make sense of thing outside his control. It worked as a story on a basic level and on a deeper level. Sim is amazing and I will watch anything with him in it (includiing the kick ass episode of Dr. Who that he did).

Philip Glenister as Gene Hunt was the back bone of the show, strong and unforgiving. A simple man who is driven to do his job and grab life by the gonads.

Liz White as Annie, Dean Andrews as Ray and especially Marshall Lancaster as Chris, all terrific in there roles. Lancaster really gave Chris life all his own, growth of character from episode to episode underplaying the role to perfection.

The US version rocked a pretty impressive cast as well. At first I could't help but make comparisons between the different versions, but soon they became a seperate thing. Kind of like reading about a character in a book and seeing them in a movie, seperate but the same, but both viable and unique.

Harvey Keitel really grew on me with his some what quieter but equally forceful portrayal of Gene Hunt. Michael Imperioli as Ray Carling was really great, and he looked like he loved the role. I think Gretchen Mol as Annie did a superb job and I expect to see her getting a lot more work soon.
My biggest reaction was Jason O'Mara as Sam, while good inthe role he just didn't seem to have the emotional impact the way Sim did. I truly bought into Sim being a tortured soul, while O'Mare simply seemed to be an irritated soul.

Both shows do a nice job of reflecting 1973 and its interesting to see the variations between the UK and the US.

In the end while I prefer the UK version I really liked both a lot and plan to rewatch them again soon.

All three are availble in the US, Season 2 of the UK version coming in Late November. I would recommend getting all three, put on some flared jeans and a paisly shirt, put on some classic David Bowie (Huny Dory) and sit back and get lost int this wonderful crazy world these amaing people created.

Buy the US version of - Life on Mars: The Complete Series

Posted by Jon The Crime Spree Guy at 2:14 AM

I saw the US version on TV from beginning to end. It seemed impossible they'd be able to explain everything satisfactorily in the end, and while they actually did pull it off, the ending seemed to rushed to really appreciate it. I would have preferred being eased into it and spending more time on Mars. NOW I want to see that UK version.