Do not adjust your internet. 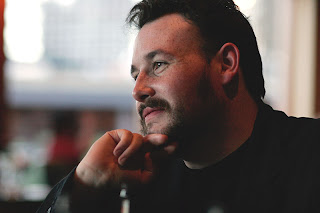 Your eyes do not deceive you. Today, The Crimespree blog has been hijacked by a beardy Scotsman.
The reason for this blatant invasion (with the permission of the usual Crime Spree crew, of course!) is to mark what is – for me – a very special occasion. Today, the 15th March 2011 is the publication date of my second novel in the US. THE LOST SISTER has been out in the UK for a while now but I’m delighted to see a hardback (and ebook, of course!) publication in the USofA.
So why choose Crimespree as the first stopping off point for this tour?
It seemed appropriate somehow, as these guys have been supportive since the beginning. Back in 2005, with a few short stories under my belt, I was also running a webzine called Crime Scene Scotland. We were a rag tag publication who were making it up as we went along. But somewhere along the line, Crime Spree started to give us their support. I seem to remember it was Jen Jordan – erstwhile features and fiction editor – who contacted us first. I can’t remember why, but I do know that soon enough I was meeting the whole Crime Spree family. And a more passionate and brilliant bunch of folks, I couldn’t name you.
Of course, I can already hear Jon yelling at me to quit sucking up** to the hosts and get on with the show. 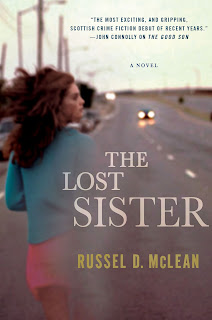 I figured it would be good to start by talking about PI novels. Because THE LOST SISTER is a PI novel. Its influenced by the American tradition, written as it is by a lad who was brought kicking and screaming into crime fandom on the back of the books of Chandler, Block and McDonald.
Of course, the first eye novels I ever truly devoured were Anthony Horrowitz’s Diamond Brothers spoofs – THE FALCON’S MALTESER and NORTH BY NORTHWEST, which introduced me to the tropes of the genre long before I even knew what a “trope” was. In fact I don’t think I’d have cared at the time. All I cared about were the great jokes and the feeling of adventure that permeated the novels. And can I just say that, having recently re-read NORTH BY NORTHWEST, these books really do still stand up very well indeed.
But when I grew up, my dad started feeding me the adult crime fiction novels. I remember him telling me about Lawrence Block in particular. Saying how, “they’re not just about solving a crime. They’re about New York. And they’re about the struggle with drink as much as anything else.”
Reading those books I realised he was right. That you could have a crime – and solve it – while really talking about so many other things. The PI model was ripe for looking primarily at people. The best eye novels are not about clever puzzles so much as they are about unravelling people and motivations and places. Because the eye is not an authority figure, he seems licensed to unravel more than just the crime. He can go places and see things that the cops cannot. And that appealed to me in a big way.
So the Block novels opened a world to me I’d never known before. His Scudder series, for me, is one of the most perfect of the last wave of eyes. With a character who actually evolves and changes between books, who is affected by cases as much as anyone else, it seemed to be the start of the grown up eye for me. Too many series characters – and eyes fall prey to this especially – become unchanging, unaffected heroes whose dimensions are actually quite transparent when held up to the light. No so Scudder. And the fact that Block has a new book coming out that continues to add to this character is a testament to him as a creation.
From Block, I guess I worked my way backwards into the history of the eye. I knew of Raymond Chandler, of course. My dad would rave about how good he was, and certainly my interest was raised when I was taken to see THE BIG SLEEP on The Big Screen (although it would take me a few years to read the book) but I didn’t jump right back. Instead I went a little further back than Block to discover Lew Archer.
The Archer novels fascinated me. Their obsession with family was clearly to become a later influence at least in the titling of my novels, and the emphasis on psychological motivation was something to be dissected and considered. These books, despite what people said, were dealing with deep themes and ideas while still remaining gripping, tightly plotted and thoroughly entertaining. In fact, it was the Archer novels that made me wonder if there was more thought and philosophy to be found in crime fiction than anywhere else.
I would later discover that the philosopher, Ludwig Wittgenstein had once made a similar suggestion in a letter to one of the old pulp magazines.
Jumping back again to the beginning cemented my love of the genre. In Hammett I discovered a steely toughness that’s sometimes absent from later works. And in Chandler, a love of language and its ability to conjure unusual images simply leaps from the page. My dad, of course, said it best (although I’m likely paraphrasing): “Read Hammett for the plot. Read Chandler for the language. But they’re both brilliant.”
I suppose it came as no surprise that when I turned to crime (writing) I would create a private detective; my own humble addition to this genre that fascinated me. But I couldn’t set my books in LA or New York. I knew that wouldn’t convince. And besides, I hadn’t ever read a PI novel set in Scotland and had to wonder what would happen if were to move the genre over here. The result became a series of short stories published in Alfred Hitchcock’s Mystery Magazine which laid the seeds for the character of J McNee who would feature in my debut novel, THE GOOD SON. And now, today, McNee is back for another investigation that will lead him to the back alleys of Scotland’s fourth city as he hunts a missing girl in THE LOST SISTER….
**But I mean it. Every word
Posted by Jon The Crime Spree Guy at 8:57 AM

Thanks, Jeremy! Stoked to know you enjoyed it!

Day 2 over at Big Beat From Badsville: http://bigbeatfrombadsville.blogspot.com/2011/03/today-its-all-about-beardy-scotsman.html

1) It appears that only the first of the three "link to this post" are good.

2) That family is important is apparent from the titles of your first two novels. I bet more than one person has accidentally typed The Little Sister for the second.
======================
Detectives Beyond Borders
"Because Murder Is More Fun Away From Home"
http://www.detectivesbeyondborders.blogspot.com/