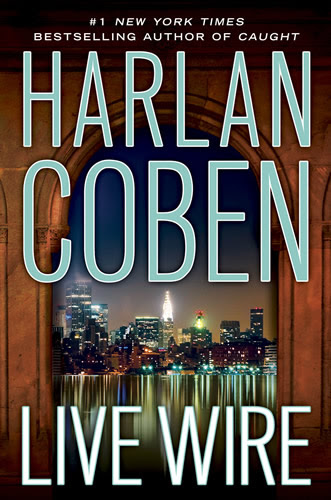 Win Lockwood to Myron Bolitar: "How to explain this?" He stopped, thought, nodded. "We have a tendency to believe the good things will last forever. It is in our nature. The Beatles, for example. Oh, they'll be around forever. The Sopranos-that show will always be on the air. Philip Roth's Zuckerman series. Springsteen concerts. Good things are rare. They are to be cherished because they always leave us too soon."

Win rose, started for the door. before he left the room, he looked back.

"Doing this stuff with you," Win said, "is one of those good things."

from LIVE WIRE by Harlan Coben

Harlan Coben, the real deal.
This book? One of the good things.


Very rarely do I wax poetic about new releases on the blog. It's even less seldom that I use this space to tout a book that will do more than well without me. It's been six week's since I read Harlan Coben's LIVE WIRE (March 22nd, Dutton). I have suggested the book to over fifty people. I have declared in my Crimespree Review that I have no doubt this book will still be in my top ten on December 31st. I have gushed at the writer on twitter. Now I'm here. If you read this blog or our magazine and find it's content informative or enjoyable, get your hands on LIVE WIRE sooner rather than later.

Harlan Coben is a publishing template for success story. He went from PBO (Paperback originals) to a hard cover deal. With sales figures that continue to grow I don't see this changing anytime soon. He continues to sell Hard Cover, Mass Market and yes, downloads. Coben's work has a mass appeal that unfortunately not every Crime Fiction writer will achieve. He's even huge in France.

He's earned every minute of it.

First and foremost is the product. Harlan doesn't write pretty, run on sentences. He writes really quick, plot driven books. He'll fool you though. When you finish reading one of his books you care about the characters. You'll understand the nuances of themes presented without having known they were there. You'll be able to walk every dark alley and suburb that made an appearance (well, as long as it's real).

Like every "mystery fan" I've run into Harlan from time to time over the years. Interacting with this person who loves what he does and does it so well is always a joy. The fact that he also gives back to everyone whenever he can is astounding. He's been involved with MWA for his entire career. He's served in almost every capacity of that organization. He's almost always at Bouchercon. He attends a number of smaller, regional conventions as he can. He's also part of that larger book world. Attending workshops and trade shows and book festivals to promote his work and that of others. He is one of our finest Ambassadors.

His excitement is real. His generosity is real. His writing is real. Whether you're a fan of the Bolitar books or a fan of the man's stand-alone thrillers, I'm confident when I tell you LIVE WIRE is a special kind of book. I cannot imagine it not being your favorite Coben book when you've finished reading it.

Were you planning to go to Borders to pick the book up? There are multiple independent bookstores you can order the book from. He'll be appearing here if you'd like a signed copy. If you're close to any of these stores go see him, say thank you. Not convinced? Visit the LIVE WIRE page on his web site.