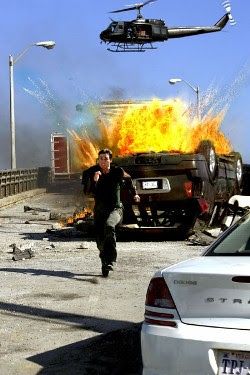 Let us cut to the chase: Mission: Impossible 3 is the best of the series. Is that really a major accomplishment? Well, the first was ok, but nothing special. The second was simply more of John Woo’s stylish fighting with little else; more flash than substance. Quite simply, the bar has not been set too terribly high.
JJ Abrams (creator of Alias and Lost) takes the helm for this edition, and raises the stakes by adding some much needed emotion. Ethan Hunt is now an IMF instructor, having retired from the field, and is engaged to be married to Julie (Michelle Monaghan), the love of his life. (Monaghan has signed on to play Angie Gennaro in Dennis Lehane’s Gone, Baby Gone. This is a chance to see her in action.)

Ethan is called away from a party to meet with his boss. It seems that Lindsey Ferris, a former student of his, is in trouble. She was on the trail of black market arms dealer Owen Davian (recent Oscar winner Phillip Seymour Hoffman), when she was discovered and taken prisoner. Ethan feels responsible and agrees to head up the rescue team.

Hoffman does his usual good job; though he really is not called on to do much other than be cold and heartless. We do get to see him beat on Cruise, which is kind of fun. (Truth be told, very few cast members are really asked to do anything that would require them to use their considerable talents.)

Luther Stickell (Ving Rhames) is back to help his old pal Ethan, along with a couple of fresh faces in Dermot (Jonathan Rhys Meyers fresh from Woody Allen’s Match Point) and Zhen (Hong Kong star Maggie Q). They accompany Ethan to Berlin to bring back their fellow agent.
I am not going to reveal too much more, as there are plenty of twists and turns that should be left for you to experience for yourself. The film moves at a frantic pace, rarely stopping to let you catch your breath. This is not necessarily bad, as it also prevents you from allowing disbelief to set it. With a film like this, logic and reason must be checked at the door. M:I 3 is filled with explosions and stunts that must be seen to believed, especially a confrontation that takes place on the Chesapeake Bay Bridge.

I’m not a huge fan of brainless blockbusters, but if you are going to see one, this is about as good as they come. The real question will be can the film overcome Tom Cruise’s recent…”eccentric” behavior. It would have been entertaining to see Ethan Hunt leap a couch, for instance, or get shot at by a villain with a water pistol. Oh well; perhaps in M:I 4? 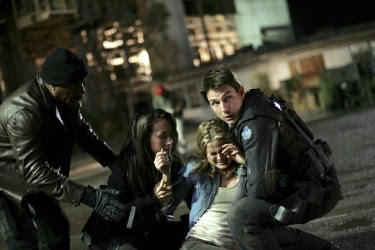 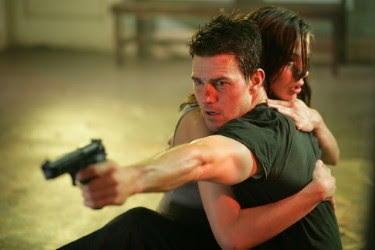 Saw MI 3 this afternoon. Eh, so-so.While I admit it is better than most of the action films out there, would it kill Hollywood to actually TRY to make a really GOOD one?

My wife and i saw this yesterday. We enjoyed it, but I agree with the review that if you stop and think about the plot too much, it does not make very much sense.